"I'll defeat you before the dumplings get cold!" - Ling Ling

Ling Ling is Genius League's new contestant! A cheerful girl who works as a part-timer in a dumpling shop, she is often seen accompanied by her pet panda.

She is a premium character, meaning she only starts with 5* 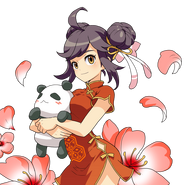 Transparent
Add a photo to this gallery
Retrieved from "https://game-of-dice.fandom.com/wiki/Ling_Ling?oldid=9516"
Community content is available under CC-BY-SA unless otherwise noted.