Treasure in the Trap

Gray is a sheriff with a dark past.

Gray is a Joker Character. This means he starts out as ★5 only and has a Joker Skill. Gray is currently depicted in 0 skill cards.

His Joker ability is based off the Skill Card: Property Steal. However, his Joker was made into a Skill Card called: Bang Bang 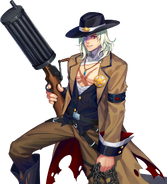 Revengeful Gray Special Offer
Add a photo to this gallery
Retrieved from "https://game-of-dice.fandom.com/wiki/Gray?oldid=8794"
Community content is available under CC-BY-SA unless otherwise noted.